In Vietnamese Village, Stitching the Wounds of Human Trafficking 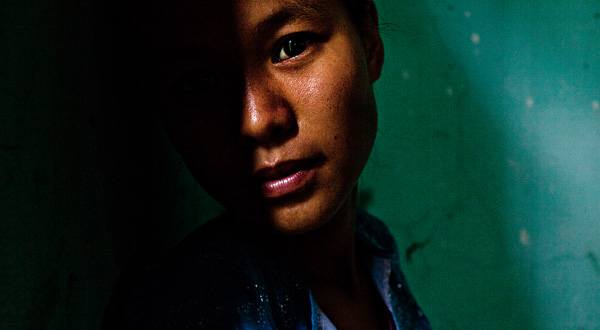 Ma Thi Mi was sold for marriage in China. She now works with Vang Thi Mai's co-op in Hop Tien making crafts to be sold to tourists. More Photos »

In Vietnam, Healing a Village Wounded by Trafficking 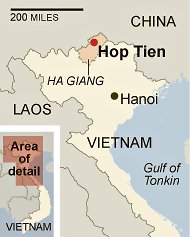 What they do not see as they glance over the ruggedly beautiful territories of northern Vietnam is the ostracism of many women in this region, and the enterprising determination of one woman who has begun to fight against it.

Over a decade ago, human traffickers descended on this seemingly forgotten slice of soaring limestone crags and lush valleys to snatch up women and children and sell them over the border in China, less than four miles away.

The first predators arrived in Hop Tien in 2003, offering in seemingly innocent tones to buy some young women new shoes. Then the women disappeared. Soon others vanished too, all between the ages of 16 and 22, to be sold as wives, forced laborers or sex workers.

They were victims of a relatively widespread problem in Vietnam that included the abduction and trafficking of children as young as 5 or 6 years old, according to Matthew Friedman, the regional project manager for the United Nations Inter-Agency Project on Human Trafficking.

Between 2001 and 2005, the Chinese police say they rescued more than 1,800 trafficking victims on the Vietnam border, according to a 2005 State Department report on human rights. Since then, particularly over the last three years, Vietnam “has waged a significant and successful anti-trafficking campaign,” Mr. Friedman said. But it still faces challenges, and trafficking in people remains a problem.

Not least is the stigma attached to the victims once they have been rescued. After villagers here reported the abductions, the Vietnamese authorities collaborated with Chinese officials to find the women and, remarkably, bring them home.

But residents’ elation lurched to horror at the realization that two of the women were pregnant. News quickly spread that the others, too, had been made sex workers, and even those who did not bear the signs of the trade paid its price.

Fearful that a fallen woman would cast shame on the whole family, several households quickly disowned their kidnapped daughters. Some of the girls built makeshift tents, blue specks that can still be seen tucked high into the mountainside, a wide distance from town.

They were outcasts, without food, income or hope.

That is when Vang Thi Mai, a short woman with work-worn hands and a round, beaming face, took them in, and changed their lives and the fortunes of the entire village.

Even today villagers are reluctant to discuss the abductions and defer to Mrs. Mai. By her account, at least seven women were taken, and after they were shunned upon their return, she invited them into her home and eventually brought them into a small textile cooperative founded by her and her husband. She taught them how to separate hemp stems into strands, spin the strands into thread, weave the thread into fabric and dye the fabric for clothes and other items.

“When I began working with the victims, the town ostracized and criticized me for being associated with the women,” Mrs. Mai, 49, recounted in an interview. “They said the women were unpure and I should not befriend such unpure women. I told them what happened was not their fault, as they were the victims of others’ wrongdoings.”

Mrs. Mai, who had worked as a nurse and had been president of the district’s Women’s Association, told the women who had returned to ignore the village’s scorn. “I said to them that when they would be able to earn money, to live on their own and to care for others with their earned money, the town would have to change their thinking,” she said.

Indeed, one by one, other village women began noticing the co-op’s profits and grew eager to join. Today the co-op is 110 women strong, and working there can increase a household’s income fourfold. Even some men have begun helping with heavy lifting and more labor-intensive chores. Over the years, Mrs. Mai said, she has also brought victims of domestic violence into the co-op.

In Vietnam, Healing a Village Wounded by Trafficking

When one of the crafts is sold, Mrs. Mai explained, the income is distributed evenly among the women who helped produce it. She keeps 3,000 Vietnamese dong, less than 15 cents, from each item for a “rainy day fund” to help the women.

Today the co-op sells its goods to an increasing number of tourists who visit. Other customers include the French Embassy, a tourism company, a hotel owner and an export company in Hanoi that ships the goods to several countries worldwide.

The village, which lies within the commune of Lung Tam, is still poor, but it earns more than before and is in many ways better off than many others in Ha Giang, the country’s northernmost province and one of Vietnam’s poorest regions. More than 90 percent of its inhabitants are ethnic minorities, most of whom scratch out a living — less than $250 per year on average — by farming among the precipitous Huang Lien and Can Ty mountain ranges.

Mrs. Mai’s co-op has managed to preserve the traditions of her Hmong minority while improving the region’s economy and empowering its women, a hat trick that has steadily earned her the support of political figures and nongovernmental organizations alike. Mrs. Mai has been visited by President Tran Duc Luong of Vietnam and was flown to France to represent her culture at an international craft fair. Batik International, based in Paris, became involved with the co-op in 2007, joined later by Oxfam and Caritas.

“It’s so unexpected when you see her and you know what she has been able to do,” Stephanie Benamozig, a project manager for Batik, wrote in an e-mail. “I almost expected her to be a strict woman in a business suit but she is just this sweet, smiling person that looks like the town mother.”

Mrs. Mai, who on her own initiative and with her parents’ support was educated until age 17, is one of the few in her province who speaks and reads Vietnamese in addition to her minority dialect. Such education is rare among the province’s Hmong, more than 60 percent of whom are illiterate.

Her own daughter is now a teacher, and she encourages the women in the co-op to send their children to school, too. Poverty, strict patriarchal mores and a lack of knowledge of the outside world have left many other trafficking survivors in this region with few options.

So much of the success of the co-op has depended on Mrs. Mai’s extraordinary skills that it has proved difficult to replicate. “Mrs. Mai is very strong,” Ms. Benamozig said. “In Lung Tam, Mrs. Mai deals with everything. She manages everything. It’s not common to have such a personality.”

Many of the women Mrs. Mai initially rescued have since married. “They were lucky to find men who were able to understand that their unpureness was not their fault and loved them for who they were,” she said. Attitudes in the village have slowly changed.

“There is still a group of elders who cannot understand and support me,” Mrs. Mai said. “But the rest — younger people — are able to see why I did what I did and support me. They also no longer ostracize the women.”