One in Four Victims of Human Trafficking is a Child 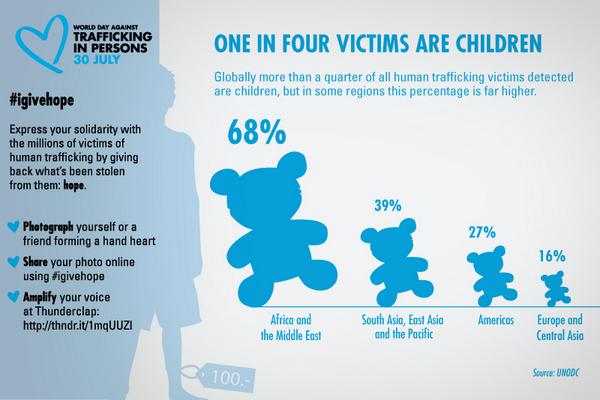 Posted by Unknown at 5:49 AM No comments:

Are Your Food and Clothes Produced With Slave Labor?

All consumers should be outraged by the idea that they’ve bought something – from shrimp to shirts – produced with slave labor. Yet as numerous reports have documented, that is a serious and growing possibility, particularly in the United States, the world’s biggest importer.
Given that much of this slave labor and trafficking activity occurs in secret, far from America’s shores, it can be hard for consumers to know whether a seafood supplier in Thailand or a clothes manufacturer in Bangladesh has built its business on the backs of indentured or otherwise abused workers.

Representative Carolyn Maloney, Democrat of New York, is seeking to compel more transparency through a bill introduced earlier this month  in Congress. The legislation would require companies with over $100 million in global gross receipts to publicly disclose any measures they have taken to prevent human trafficking, slavery and child labor as part of their annual reports to the Securities and Exchange Commission.
The bill seems carefully crafted not to impose onerous new burdens on business. While companies would have to make reports to the SEC, they wouldn’t be required to take specific actions, just disclose whatever steps they feel have been necessary to combat trafficking and slave labor.
Although the bill isn’t a panacea, at least it would provide consumers with information they don’t have access to now about what companies are doing, or not doing, to avoid using slave or trafficked labor. And it should serve as an incentive for companies to take a closer look at their supply chains.
As the bill argues, the existing legislative and regulatory framework to prevent goods produced by forced labor, slavery, human trafficking and the worst forms of child labor from passing into American market is “gravely inadequate.”
There could be an estimated 29 million victims of all sorts of human trafficking worldwide. Lacking any clear evidence that American businesses are rejecting such sordid and dehumanizing profit-making, consumers are left to wonder about the origin of the products they are buying.
In addition to the SEC reports, the bill aims to remedy that by directing the secretary of labor to put together a top 100 list of companies complying with supply chain labor standards. It’s hard to see why any company would not want that designation to use as a marketing tool.
Posted by Unknown at 11:26 AM No comments: