Only 40 cases have been prosecuted since new offence came into effect in April 2010, Home Office strategy reveals 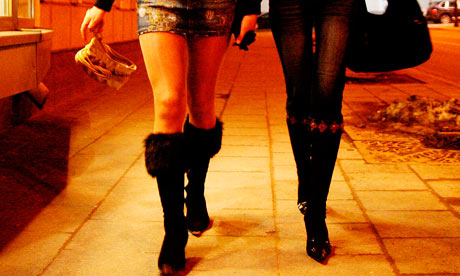 The Home Office strategy says targetting those who pay for sex from trafficked women is a key element in disrupting the market for human trafficking. Photograph: Lewis Whyld/PA

The failure of police and prosecutors to enforce a law that criminalises men who pay for sex with trafficked women is jeopardising the attempt to tackle human trafficking into Britain.

A Home Office strategy published on Tuesday says that only 40 cases have been prosecuted since the new offence came into effect in April 2010 and that includes prosecutions of kerb crawlers.

"Enforcement of this offence would be a key part of the chain that leads to women being trafficked into the country and help deter those that may consider paying for sexual services from someone who may be trafficked, thereby reducing demand," says the strategy.

The document calls for a greater effort to target the demand for "inexpensive, unprotected and often illegal labour" and to create a business environment where it is neither considered desirable or readily available.

"There is growing awareness amongst consumers of the harm caused by unethical business practices. But more needs to be done to increase understanding and encourage greater corporate moral and social responsibility within the private sector," the strategy acknowledges.

Home Office minsters are to review by the end of this year the current legislation on trafficking to ensure that it supports the effective prosecution of human traffickers. The strategy recognises that there are some problems caused by the fact that trafficking for sexual exploitation is prosecuted under the 2003 Sexual Offences Act while labour trafficking comes under the 2004 Asylum and Immigration Act which has a different standard of proof.

"While there have been successful prosecutions under both, there are some disparities which make the legislative framework less straightforward than it could be for prosecutors. In addition, the different levels of proof mean that it is more difficult to prosecute for labour exploitation," says the new strategy. Crown Prosecution figures show that just 48 people were prosecuted over trafficking offences in England and Wales.

The official strategy says a key element in disrupting the market for trafficking and reducing its profitability is to target those who pay for sexual services from trafficked women. In particular it cites the 2009 Policing and Crime Act which introduced an offence of paying for the sexual services of a prostitute subjected to force, deception, threats or any other form of coercion.

"This means that someone who pays for the sexual services of a woman (whether or not they know the woman has been trafficked) can be arrested and prosecuted," says the strategy. It notes that as of June only 40 offences have involved somebody being charged since April 2010 and that includes cases of kerb crawling.

The strategy confirms that from this month the Salvation Army will play a central role in the £2m-a-year programme to support the adult victims of trafficking.

It also advocates a more targeted focus on the countries that are the major source of trafficking; extending the use of powers to seize the assets of traffickers and establish closer relationships with overseas law enforcement agencies.

The immigration minister, Damian Green, said the new strategy would send the message that Britain was not a soft touch for traffickers. "We will pursue and disrupt trafficking networks overseas wherever possible to stop them before they ply their trade in the UK and then bring them to justice," he said.

Human rights charities have criticised Britain's human trafficking strategy in the past, arguing that it has backfired, increased the suffering of victims and undermined attempts to prosecute the criminal gangs who abused them. The Crown Prosecution Service earlier this month issued new guidance that women and children who were suspected of having been trafficked should no longer be treated as criminals.