Campaign Against Sex Trafficking is Gaining 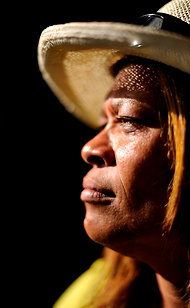 Kennette Thomas, 49, was 15 when she married the man who forced her into prostitution.

A nonprofit, nonpartisan news organization providing local coverage of Chicago and the surrounding area for The New York Times.

More From the Chicago News Cooperative »

A nonprofit, nonpartisan news organization providing local coverage of Chicago and the surrounding area for The New York Times.

More From the Chicago News Cooperative »

The profits referred to in the reports came at the expense of those who often had no choice but to participate in the sex trade, according to a 2008 study on domestic sex trafficking of women and girls in Chicago. The study, by DePaul University and the Illinois Criminal Justice Information Authority, found that 35 percent of its 100 subjects were coerced into the sex trade. Two-thirds of participants were forced to live in a certain location and more than half were not allowed to keep any earnings, they said.

Ms. Thomas said she was one such woman. “All the money I gave him,” she said of her pimp. “I could have been in Hollywood with acres of land.”

The predator accountability law provides few legal recourses for those being sued. It does not allow a defendant to use victims’ consent to sex acts, prior criminal conduct or their marital, sexual or familial relations as defenses.

Lawyers and advocates say any lawsuit brought against traffickers would be intended to provide a model for victims in other states that are considering legislation against trafficking.

But some lawyers say the law may go too far in allowing victims to sue publications that knowingly advertise prostitution. “I don’t disagree with where they were going with it,” said Chris Keleher, a lawyer at Querrey & Harrow. “But at the same time you have to be wary of the First Amendment implications.”

But Samir Goswami , an author of the accountability act and director of corporate responsibility at LexisNexis, said the law would not infringe on publishers’ rights. “We worked very closely with the A.C.L.U. and other groups to make sure those rights were protected,” he said.

Many prostitutes live in fear of their pimps, and Ms. Wolf Markham pointed out another obstacle to the law’s success when she said, “If we convince these victims to come forward, how are we going to keep them safe?” Ms. Thomas, the former prostitute, said she would encourage other victims to bring lawsuits under the accountability act but would never bring one against her former pimp.

“For me, I’ll leave it alone,” she said. “I don’t want to live that life anymore, or think about it.”

In 2009, she finally broke away. Still, she said, the prostitution and the drugs she had used landed her in jail dozens of times, so many that her rap sheet ran 32 pages. “Prostitution, drugs. That’s my whole life history,” Ms. Thomas, 49, said. “That’s the only life I knew.”

Thanks in part to the lobbying of Ms. Thomas and others, Gov. Pat Quinn earlier this month signed the Illinois Justice for Victims of Sex Trafficking Crimes Act. The law enables victims of sex trafficking — people recruited or coerced into sexual exploitation — to clear their records of prostitution convictions.

Under the law, the person must petition for a hearing in the court where the prostitution convictions were handed down, produce evidence that she or he was a victim of sex trafficking and ask the judge to vacate the convictions.

The law, the third in the nation to address the problem, is part of a larger statewide campaign by law enforcement and local advocacy groups to hold pimps, customers and traffickers accountable for the sex trade, while supporting its survivors.

Chicago’s historic role as a transportation center has also made it a hub of the nation’s sex trade. Each year, some 16,000 to 25,000 women and girls in Chicago are involved in the commercial sex trade, according to several studies. In 2010, Illinois generated the fourth highest call volume to the National Human Trafficking Resource Center, surpassed only by California, Texas and Florida.

The new law is “an important part of a larger fabric of responses that we are advocating for,” said Lynn Johnson, policy director at the Chicago Alliance Against Sexual Exploitation. “Because Illinois is really at the forefront for ending commercial sexual exploitation.”

The organization’s campaign, END Demand Illinois, which helped lead the push for the new law, is the latest accomplishment in a strategy that began several years ago.

In 2010, Illinois passed the Safe Children Act, making it the first state in the nation to give children under 18 immunity from prosecution for prostitution. That year the Cook County state’s attorney’s office created a unit to pursue criminal cases of human trafficking. In March, county prosecutors won their first case when a sex-ring organizer, Troy Bonaparte, 46, was sentenced to 18 years in prison.

On another front, a group of government and civic organizations is trying to breathe new life into the Illinois Predator Accountability Act. Passed in 2006, it is the nation’s strongest legislation for helping survivors of human trafficking. It goes a step beyond traditional anti-prostitution laws by allowing victims to file civil suits for punitive damages against suspected sex traffickers, those who pay for prostitutes, strip club proprietors and Web site publishers who knowingly benefit from the sex trade — even if no criminal charges have been filed against them.

Yet in the five years since the law was passed, no lawsuits have been brought. Advocates blame the psychological and emotional difficulties that victims face in bringing such suits against often-violent traffickers, as well as the law’s requirement that all crimes must have occurred after 2006.

“I think finding those individuals who are ready to do this is going to be the greatest challenge,” said Daria Mueller, an author of the legislation and a senior policy analyst with the Chicago Coalition for the Homeless.

In late July, under a new partnership between the Cook County state’s attorney’s office, the information services company LexisNexis and the Legal Aid Bureau of Metropolitan Family Services, a group of lawyers, community organizers and policy analysts, will begin identifying victims willing to file suits and intends to bring cases to trial by January 2012.

Successful lawsuits will provide compensation to victims, and experts anticipate that going after the wallets of those behind the sex trade will have a chilling effect on the industry.