This is the kind of situation that can lead to human trafficking or severely exploitative labor practices... 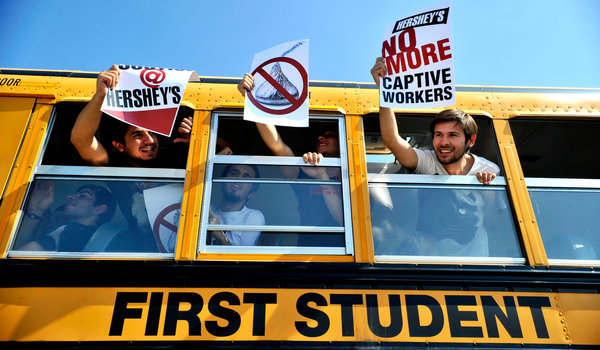 PALMYRA, Pa. — Hundreds of foreign students, waving their fists and shouting defiantly in many languages, walked off their jobs on Wednesday at a plant here that packs Hershey’s chocolates, saying a summer program that was supposed to be a cultural exchange had instead turned them into underpaid labor.

The students said they were expecting to practice their English, make money and learn what life is like in the United States.

The students, from countries including China, Nigeria, Romania and Ukraine, came to the United States through a long-established State Department summer visa program that allows them to work for two months and then travel. They said they were expecting to practice their English, make some money and learn what life is like in the United States.

In a way, they did. About 400 foreign students were put to work lifting heavy boxes and packing Reese’s candies, Kit-Kats and Almond Joys on a fast-moving production line, many of them on a night shift. After paycheck deductions for fees associated with the program and for their rent, students said at a rally in front of the huge packing plant that many of them were not earning nearly enough to recover what they had spent in their home countries to obtain their visas.

Their experience of American society has been very different from what they expected.

“There is no cultural exchange, none, none,” said Zhao Huijiao, a 20-year-old undergraduate in international relations from Dalien, China. “It is just work, work faster, work.”

Each summer, the State Department brings many thousands of foreign students to the United States on the international work-travel program, with visas that are known as J-1. Over the years, the program has successfully given university students from distant countries a chance to be immersed in everyday America and to make lasting friends.

But in recent years, the program has drawn complaints from students about low wages and unexpectedly difficult work conditions. It appears, however, that the walkout at the Palmyra plant is the first time that foreign students have engaged in a strike to protest their employment.

John Fleming, a State Department spokesman, said officials were aware of the students’ protest and had sent staff members to Hershey, Pa., where the candy company is based, to investigate. “It is our job to ensure that all J-1 visa holders are accorded their rights under all provisions of the Summer Work Travel program,” Mr. Fleming said.

The arrangements that brought the foreign students to work at the Eastern Distribution Center III, a vast warehouse in a trim industrial park near Hershey, the American chocolate capital, involved layers of contractors.

The students said they mainly placed blame on the organization that manages the J-1 visa program for the State Department, the Council for Educational Travel, U.S.A., which is based in California.

Rick Anaya, chief executive of the council, said he had brought about 6,000 J-1 visa students to the United States this summer. Mr. Anaya said he had tried to respond to the Palmyra workers’ complaints. “We are not getting any cooperation,” he said. “We are trying to work with these kids. All this negativity is hurting an excellent program. We would go out of our way to help them, but it seems like someone is stirring them up out there.”

A spokesman for Hershey’s, Kirk Saville, said the chocolate company did not directly operate the Palmyra packing plant, which is managed by a company called Exel. A spokeswoman for Exel said it had found the student workers through another staffing company.

The spokeswoman, Lynn Anderson, said: “We contract with a staffing agency to provide temporary employees, some from the local work force and some J-1 visa holders. We don’t have a lot of influence over some of those issues that they’ve raised.”

A labor organization, the National Guestworker Alliance, which has been working with the students, presented a complaint on Wednesday to the State Department asking for the Council for Educational Travel, U.S.A. to be removed from its list of sponsoring organizations.

In the protest on Wednesday, about 200 students who were scheduled to start work on an evening shift at 3 p.m. walked into the plant and presented a petition with several hundred signatures to a management representative. Then, together with some students coming off the daytime shift, they marched out.
Enlarge This Image 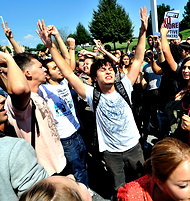 “There is no cultural exchange, none, none,” a student from China said. “It is just work, work faster, work.”

The students walked off their jobs at a plant in Palmyra, Pa.

They came down the driveway to the plant, with semi-trailer trucks wheeling by, chanting, “We are the students, the mighty, mighty students!” and labor slogans in English as well as their own languages. The students said they believed that so many of them walking off their jobs would stop some production on their shifts.

“We want to own our rights,” Ms. Zhao said, speaking in English. She and three other Chinese students held out their arms, pointing to bruises they said they had from moving large boxes.

Representatives from two American labor unions participated in the rally at an intersection outside the plant. Three labor officials, including Rick Bloomingdale, president of the Pennsylvania State Federation of the A.F.L.-C.I.O., and Neal Bisno, president of a Pennsylvania branch of the Service Employees International Union, staged a brief sit-in at the plant entrance and were arrested.

Harika Duygu Ozer, 19, a second-year medical student from a university in Istanbul, said she had heard from friends that the summer exchange program would be fun and that she would earn enough money to pay for her medical school tuition.

When she was offered a contract for a job at a plant with Hershey’s chocolates, she said, she was excited. “We have all seen Charlie’s chocolate factory,” she said. “We thought, ‘This is good.’ ”

Like many other students, Ms. Ozer said she invested about $3,500, which included the program costs, to obtain the J-1 visa and travel to the United States.

Several Chinese students, including Ms. Zhao, said they had paid more than $6,000 in the process of securing visas.

Ms. Ozer said she worked an eight-hour shift that began at 11 p.m.

“You stand for the entire eight hours,” she said. “It is the worst thing for your fingers and hands and your back; you are standing at an angle.”

At one of the sites where she worked, she said, cameras were trained on her, and supervisors told her that if she did not want to maintain the pace of work, she should leave.

Godwin Efobi, 26, a third-year medical student from Nigeria who is studying at a university in Ukraine, said his job was moving boxes. “Since I came here, I have a permanent ache in my back,” Mr. Efobi said. “Holding a pen is now a big task for me; my muscles ache.”

The students said they decided to protest when they learned that neighbors in the apartments and houses where they were staying were paying significantly less rent.

“The tipping point was when we found out about the rent,” Mr. Efobi said.

Ms. Ozer and other students said they were paid $8.35 an hour. After fees are deducted from her paychecks as well as $400 a month for rent, she said, she often takes home less than $200 a week. “We are supposed to be here for cultural exchange and education, but we are just cheap laborers,” Ms. Ozer said.