With Special Courts, State Aims to Steer Women Away From Sex Trade 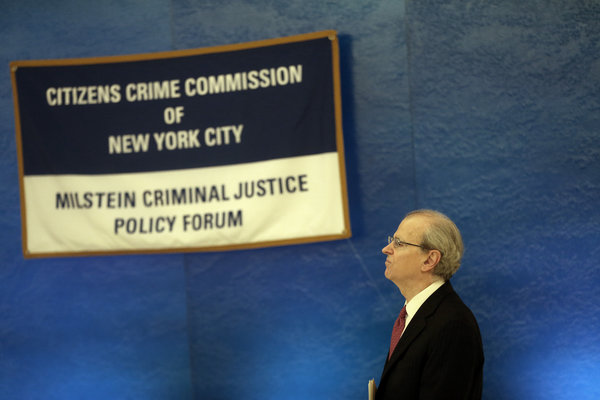 Readers shared their thoughts on this article.


Eleven new courts across the state, modeled on three narrower pilot projects in New York City and Nassau County, will bring together specially trained prosecutors, judges and defense lawyers, along with social workers and an array of other services, the chief judge, Jonathan Lippman, said in a speech to the Citizens Crime Commission in Midtown Manhattan.
“Human trafficking is a crime that inflicts terrible harm on the most vulnerable members of society: victims of abuse, the poor, children, runaways, immigrants,” Judge Lippman said. “It is in every sense a form of modern-day slavery. We cannot tolerate this practice in a civilized society, nor can we afford to let victims of trafficking slip between the cracks of our justice system.”
The new Human Trafficking Intervention Courts will handle all cases involving prostitution-related offenses that continue past arraignment, Judge Lippman said. Cases will be evaluated by the judge, defense lawyer and prosecutor, and if they agree, the court will refer defendants to services like drug treatment, shelter, immigration assistance and health care, as well as education and job training, in an effort to keep them from returning to the sex trade.
The new program is in some measure modeled after specialized courts for domestic violence and low-level drug offenses. They are intended to end the Sisyphean shuffling of victims of trafficking through the criminal justice system, a process that fails to address the underlying reasons for their landing in court — or on the streets — in the first place, the judge said.
The initiative comes at a time of growing consensus among criminal justice professionals across the country that in many cases it makes more sense to treat people charged with prostitution offenses as victims rather than defendants. It is a view that is largely born of an increasing focus on the widespread trafficking of under-age girls; women typically enter prostitution in the United States between ages 12 and 14, Judge Lippman said.
That consensus was reflected by some of the people who joined Judge Lippman for the announcement. There were district attorneys from across the state, including Cyrus R. Vance Jr. from Manhattan, Richard A. Brown from Queens, Daniel M. Donovan Jr. from Staten Island, Janet DiFiore from Westchester County and Kathleen M. Rice from Nassau County, who heads the state’s District Attorneys Association; Steven Banks, the Legal Aid Society’s attorney in chief; and Lori L. Cohen, director of Sanctuary for Families’ Anti-Trafficking Initiative, a leading advocate for trafficking victims. Representatives of some of the dozen other service providers involved in the new program also attended.
The consensus was also reflected by three laws passed by the New York Legislature in recent years, including the Anti-Human Trafficking Act, which criminalizes sex and labor trafficking; the Safe Harbor for Exploited Children Act, under which anyone younger than 18 who is arrested on prostitution charges is treated as “a sexually exploited child”; and a law that allows trafficking victims to have their prostitution convictions vacated.
The new courts, one in each of New York City’s five boroughs and six others situated from Long Island to Buffalo, will all be functioning by the end of October, Judge Lippman said. They will handle 95 percent of the thousands of cases each year in which people are charged with prostitution and human trafficking offenses.
Other cities across the country have special trafficking courts, including Baltimore; Columbus, Ohio; Phoenix; and West Palm Beach, Fla. A law that took effect this month in Texas requires the largest counties to start prostitution diversion programs, and Connecticut has two courts that deal with so-called quality-of-life offenses, including prostitution.
But New York State’s new courts, Judge Lippman said, represent the first statewide system to deal with human trafficking.

Readers shared their thoughts on this article.

Hours after Judge Lippman’s speech, the nation’s most influential medical advisory group released a report that examined the impact of sex trafficking and the exploitation of children in the United States and called for the development of laws and policies with goals similar to those expressed by the judge. The report, by the Institute of Medicine, part of the National Academy of Sciences, and paid for by the Justice Department, says sex trafficking and such exploitation are “commonly overlooked, misunderstood and unaddressed forms of child abuse.”
The report also points out that despite statutory rape laws in every state that say children under a certain age cannot legally consent to having sex, most states allow minors to be arrested and charged with prostitution crimes as opposed to being treated as victims.
Mr. Banks, of the Legal Aid Society, said in an interview that the new system was “an extremely important step forward nationally” to set up courts where people accused of prostitution and related offenses can be connected to programs that offer what he called “a pathway to change.”
“It’s certainly critical that underlying all of this is the concept of providing a helping hand rather than the back of a hand,” he said. “Survivors of trafficking are left with literally an indelible scar in the form of a criminal record that affects employment, housing, financial aid for college and government benefits and even the ability to stay in this county.”
The approach being tried in New York, he added, “can give human trafficking survivors a second chance in life.”
Posted by Unknown at 5:36 PM