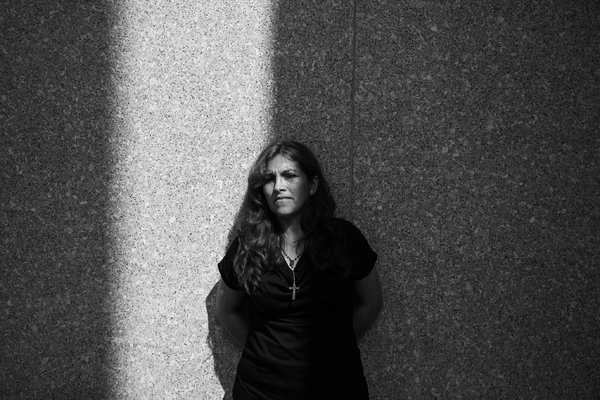 Damon Winter/The New York Times
María Ríos Fun said she was forbidden from leaving the house except to drive her employers’ children to and from school.

The woman, María Ríos Fun, said that the official, Marita Puertas Pulgar, first secretary of the Peruvian mission, and her partner, Alexis Aquino Albegrin, had promised her fair wages and a humane work schedule when they recruited her in Lima, Peru, last year to work in their house in Wayne, N.J., while Ms. Puertas was stationed at the United Nations.
But on her arrival, Ms. Ríos said, the couple subjected her to a grueling work schedule with one day off every six weeks and a campaign of intimidation and coercion.
Ms. Ríos, 40, filed a lawsuit last week in United States District Court in Newark accusing Ms. Puertas and Mr. Aquino of trafficking her for forced labor. “The defendants preyed on her vulnerability, isolated her, and required her to work long hours for virtually no pay,” the lawsuit said.
In a statement issued through their lawyer, Ms. Puertas and Mr. Aquino said, “We are surprised by the allegations by Ms. María Esmeralda Ríos Fun, which we reject categorically.”
The couple said they would refrain from further comment in order not to harm the judicial process.
Every year, thousands of foreigners are issued special visas to come to the United States and work for foreign diplomats. But immigrants’ advocates contend that some diplomats, behind the cover of diplomatic immunity, take advantage of those employees, violating local and federal labor laws and sometimes confining them to a form of modern-day slavery.
A report by the Government Accountability Office in 2008 found that since 2000 at least 42 foreigners brought to the United States to work as domestic workers said they were abused by their employers.
The authors of the survey asserted that their tally was likely an undercount because many victims were probably too fearful to speak up.
Ms. Ríos said in an interview that she had worked for Ms. Puertas and Mr. Aquino in Buenos Aires, where they were stationed in the early 2000s, and later in Lima, Peru. She had little complaint with their treatment of her during those years.
Before coming to the United States last October, she said, she signed a contract establishing the terms of her employment: She would work as a “housekeeper” seven hours a day, five days a week, at a wage of $9.82 per hour and overtime pay of $14.73 per hour. In addition, according to the lawsuit, she would be granted paid holidays, sick days and 15 paid vacation days per year, as well as three meals per day, six days per week.
But as soon as she arrived, Ms. Ríos said, her employers revealed hidden intentions. She said she was ordered not only to clean the two-story, four-bedroom house but also to cook for the couple and their four young children — the youngest of whom was 18 months old — and drive the older children to and from school. Amid her cleaning and cooking duties, she said, she would baby-sit for and change the infant, as well as care for house guests and tend to the garden.
Ms. Ríos’s work days often began at dawn and ended at 10 p.m., and she was given only “very basic food, like bread and coffee,” the lawsuit said. “Ms. Ríos Fun frequently was hungry.”
Instead of paying her the rate stipulated in the contract, she said, the couple told her they would pay her a flat rate of $900 a month, significantly less than her base salary not including overtime. Even so, Ms. Ríos said, they paid her only several hundred dollars each month after deducting money to cover the cost of clothing and toiletries they purchased for her.
She was given only four days off in six months, she said.
The couple isolated Ms. Ríos, who does not speak English, by forbidding her to leave the house except to drive the children to and from school, the lawsuit said. It also said that they subjected her to “verbal abuse and psychological coercion.”
On April 27, Ms. Ríos called a national human trafficking hot line that was listed in documents she had been given at the United States embassy in Lima. She fled and was eventually introduced to Safe Horizon, an agency in New York City that helps crime victims, which has provided her with counseling, shelter, legal representation and other support.
The lawsuit said Ms. Ríos was seeking the return of her belongings as well as unspecified back wages and damages for trafficking and breach of contract. She also might be eligible for a T visa, which is reserved for victims of human trafficking, said her lawyer, Dana Sussman, staff attorney for Safe Horizon’s anti-trafficking program.
“I don’t want others to go through what I did,” she said.
Posted by Unknown at 4:32 AM