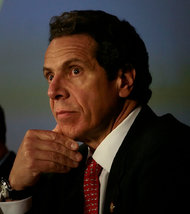 Gov. Andrew M. Cuomo had insisted he would accept nothing less than the entire package, even if dropping the abortion language.

But after more than five months of advocacy by the governor — including a trip to Seneca Falls, a landmark of the women’s suffrage movement — lawmakers ended their annual session over the weekend without approving a single element of the proposal, in large part because one of the measure’s provisions would have strengthened abortion rights language in state law.
The bill’s failure followed an abrupt strategic shift in the final days of the session. Until then, Mr. Cuomo, as well as women’s right’s advocates and other Democratic elected officials, insisted that they would accept nothing less than the entire 10-point package, even if dropping the abortion language might allow them to win nine of the proposed provisions. But on Friday, the advocates splintered — Naral Pro-Choice New York stood by the all-or-nothing approach, while others, including Mr. Cuomo, urged accepting a partial victory — and the entire package sank.
The result has left many lawmakers disappointed.
“Women’s equality and health should not be compromised because of a political game of chicken,” said Assemblywoman Nily Rozic, a Queens Democrat, who opposed ceding any element of the package.
There was little agreement, even about the substance of the legislation: Mr. Cuomo and women’s rights advocates said it would simply codify in state law the right already guaranteed by Roe v. Wade, but abortion opponents said it would expand the availability of abortions.
The Assembly, controlled by Democrats, voted for the entire package, but the Senate, controlled by a coalition of Republicans and independent Democrats, approved only the nine provisions not about abortion. When the leader of the independent faction of Democrats, Senator Jeffrey D. Klein of the Bronx, tried to attach the abortion language to a bill on medical records, the effort failed by one vote.
Some advocates of the legislation now want the Assembly to come back and approve the non-abortion measures, even while hoping to strengthen abortion law at some other time. The Assembly speaker, Sheldon Silver, has not ruled that out.
“The bottom line is the other nine points provide important protections for women in the workplace and in the community,” said Donna Lieberman, the executive director of the New York Civil Liberties Union, “and it’s a disappointment that with such broad support, and such broad bipartisan support, those have yet to become law.”
But some lawmakers were adamant that the abortion issue was inseparable from other women’s rights concerns.
“I think it’s inappropriate and unfair to leave out women’s health when you’re claiming to be an advocate for all these other parts of a woman’s life,” said Assemblywoman Didi Barrett, a Hudson Valley Democrat who is a former board member of Planned Parenthood of New York City and Naral. “They’re all really important, but if a woman can’t make choices about her own body and her own reproductive health, you’re really not delivering equality in these other areas.”
In addition to the abortion language, the legislation, according to the Cuomo administration, would have banned sexual harassment in workplaces with fewer than four employees. It would also have banned employers from denying jobs or promotions to workers because they have children, bar landlords from discriminating against victims of domestic violence, and increase potential damage payments in pay equity discrimination cases.
Opponents of abortion said the collapse of the legislation demonstrated that the only issue of concern to the bill’s champions was abortion.
“That’s what we were saying from Day 1: that this was just a smoke screen for abortion expansion, and the only reason they were bundled together was for political reasons, which we found unconscionable,” said Dennis Poust, a spokesman for the New York State Catholic Conference.
“It would have been very nice to see these other pieces pass, but their agenda is abortion,” he added. “They couldn’t get that, so they torpedoed the whole thing.”
One thing is certain: the abortion issue will be a prominent one in next year’s legislative elections. Naral Pro-Choice New York ran an independent-expenditure campaign for some candidates in 2012, and Andrea Miller, its president, said, “One of the things that this made crystal clear, and probably one of the most important things that this session demonstrated, is what our roadblock is, and that roadblock is the State Senate.”
Mr. Cuomo, through a spokeswoman, said he believed the debate had advanced the topic of women’s rights, and that now it was up to voters to respond.
“Issues that have long been nonstarters in the Legislature, including stronger laws against human trafficking, sexual harassment in the workplace, income inequality and other critically important protections, are now in their strongest position in years to become law,” said the spokeswoman, Melissa DeRosa. “In the end, the public will hold individual legislators accountable if they stand in the way of finally achieving equality for women in New York State.”