Kristof is almost always worth blogging about... 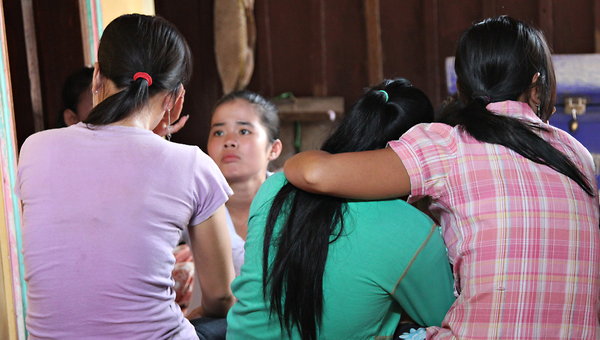 During a raid on a brothel in Anlong Veng, Cambodia, a Vietnamese social worker (facing camera) reassures several girls who have just been rescued. The girl in the center was a Vietnamese seventh grader who had been trafficked into Cambodia a few months earlier. The social worker herself was rescued from a brothel years ago. 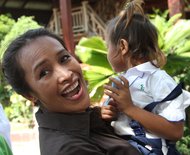 Somaly Mam with a girl rescued from a brothel at a shelter she runs for them in rural Cambodia. Some of the girls are barely old enough for elementary school.

AGAINST my better judgment, I found myself the other day charging into a well-armed brothel in a police raid. But I was comforted to be with one of my heroes, Somaly Mam.

Somaly dedicates her life to battling forced prostitution, for she herself was sold as a child to a Cambodian brothel. After enduring torture and rapes, Somaly escaped and reinvented herself as an anti-trafficking activist.

It’s partly because of grass-roots activists like Somaly, both in the United States and abroad, that human trafficking is increasingly recognized as a central human rights challenge. A U.N. agency estimates that more than 12 million people are engaged in forced labor, including sexual servitude. Another U.N. report has estimated that in Asia alone, “one million children are involved in the sex trade under conditions that are indistinguishable from slavery.”

In the abstract, the 21st-century abolitionist movement sounds uplifting and even glamorous. But riding beside Somaly in her car toward a brothel bristling with AK-47 assault rifles, it was scary.

This town of Anlong Veng is in northern Cambodia near the Thai border, with a large military presence; it feels like something out of the Wild West. Somaly, whose efforts are financed mostly through American supporters of herSomaly Mam Foundation, had sneaked into this brothel and surreptitiously photographed very young girls. With the photographs, she convinced Cambodia’s anti-trafficking police to mount the raid.

It didn’t help my nerves that Somaly, whom I’ve known for years, is fearless. Brothel-owners have fought back ferociously against Somaly: They’ve sent death threats, held a gun to her head and shot up her car.

“We all know that our lives are in danger,” she says, a little too cavalierly. “I’ve never been so happy in my life. They can kill me now.”

When Somaly refused to back off, she said the traffickers kidnapped her 14-year-old daughter and gang-raped the girl with a video camera rolling. The daughter was recovered in a brothel, and Somaly blames herself. It’s a credit to the courage of mother and daughter that they remain steadfast, upbeat and close, and determined to make a difference. These days, Somaly is very careful with that daughter and her other children.

The three unmarked police cars ahead of us pulled up in front of the brothel, and the police and prosecutor ran in. Somaly and I followed and watched as police with assault rifles confiscated cellphones from the brothel manager, a middle-aged woman, and her male partner, so that they couldn’t call for reinforcements.

We quickly found five girls and one young woman, three Cambodians and three Vietnamese. The youngest turned out to be a seventh grader trafficked from Vietnam three months earlier, making her about 12 years old.

The anti-trafficking police found 10 rooms equipped with beds and full of discarded condoms in the trash; the rooms all locked with padlocks from the outside, presumably to incarcerate girls inside. Several other young girls Somaly had photographed in her earlier visit couldn’t be found, despite a frantic search of all the locked rooms. “They’re probably kept at another house in town, but we don’t know where it is,” Somaly said.

Soon the mood turned ugly. The brothel-owning family had strong military connections, and the man was wearing the uniform of a senior military officer. Someone inside the brothel must have called in reinforcements, and seven armed soldiers soon arrived to order the police and prosecutor to release the military officer. The prosecutor responded with courage and integrity. He declared that the military officer would have to be taken to the police station. “If you want to stop me, you can shoot me if you dare,” he told the soldiers.

The soldiers backed down, but, in the end, the army officer was not charged. The woman, who had more day-to-day involvement in managing the girls, is expected to be prosecuted, and the brothel presumably will now be out of operation. The girls were placed in a shelter run by Somaly, and they are receiving plenty of love from other girls previously extricated from sexual slavery.

That’s how the battle against human trafficking is being fought around the world. Ultimately, the way to end this scourge is to make it less profitable and more risky for the traffickers. Above all, that means targeting not the girls but putting traffickers and pimps in jail, whether in Cambodia or in New York.

Slowly, that is happening. I can see the progress here in Cambodia, where 10-year-old girls were openly for sale when I began reporting on forced prostitution. Now they’re still sold, but fewer of them, and more discreetly — and traffickers are going to jail. There may well be prostitution a century from now, but we don’t have to accept 12-year-olds being raped until they get AIDS.

In the 19th century, the world conquered traditional slavery. And in this century, with leaders like Somaly, we can emancipate the victims of human trafficking.