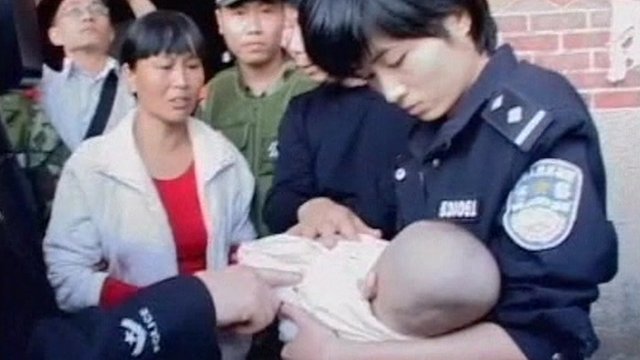 More than 600 people were arrested in raids in 10 Chinese provinces.

A BBC correspondent in Beijing says the staggering numbers in the investigation reveal the scale of the country's child-trafficking problem.

The Ministry of Public Security said 178 children had been rescued in the joint investigation. It did not give their ages and said they were being cared for while officials sought to trace their parents.

The ministry described the crackdown as "one of the biggest victories for anti-trafficking".

"Police departments will continue to crack down on child trafficking and ensure that involved children are kept out of the reach of buyers," the statement said.

It appears police stumbled on one trafficking gang while investigating a road accident in the southern province of Sichuan in May.

Links were found to at least 26 other trafficking gangs in China, the statement said. A second gang was uncovered in August in the south-eastern province of Fujian.

The BBC's Michael Bristow in Beijing says it remains unclear how many more cases remain undiscovered.

Our correspondent says many people blame China's one-child policy because it creates a demand for children - particularly boys.

Families may also buy trafficked women and children to use as extra labour and household servants, as well as brides for unmarried sons.

Clear data is hard to obtain but correspondents say thousands of children are snatched from their families each year and sold in China. Despite government efforts to counter it, child trafficking is a growing problem.

Greater freedom of movement that came with China's economic reforms is thought to have made it easier for trafficking gangs to operate.