The Lessons of Belle Glade 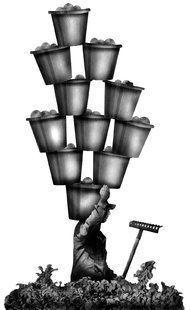 For Op-Ed, follow@nytopinion and to hear from the editorial page editor, Andrew Rosenthal, follow@andyrNYT.


“I would hear their voices — they would ask questions,” Mr. Wirtz recalled, but “they weren’t going to be identified.”
Congress had just terminated the famously exploitative Bracero Program for Mexican guest workers in response to reports of miserable pay and working conditions and farm employers’ illegal use of braceros as strikebreakers. The last of these workers — 4.5 million over the program’s lifetime — were just leaving when Mr. Wirtz visited Belle Glade to investigate the federal government’s remaining guest-worker program, known as H-2, which annually imported roughly 15,000 men from the Caribbean.
Mr. Wirtz was convinced that growers didn’t need Caribbean guest workers either, given widespread unemployment among American farmworkers, who still fell outside minimum wage, maximum hour, Social Security, workers’ compensation and collective bargaining laws. Until employers lost access to foreign workers, he reasoned, they had no incentive to improve conditions to attract American workers to their farms.
Migrant labor is in the news again, as the House takes up the Senate’s immigration bill and the draconian alternative of Representative Robert W. Goodlatte, a Virginia Republican. Both bills would expand guest-worker programs. But only the Senate plan tries to address their worst features.
Mr. Wirtz’s solution to American farmworkers’ chronic unemployment was to make the H-2 program so expensive that only employers desperate for labor would resort to it. He raised guest-workers’ wages; required employers to pay for workers’ housing and their travel costs from home; and, like his Republican predecessor, made growers search for American workers before he would approve guest workers. Growers insisted that trying to use “local domestic help” was like “trying to convert Castro to democracy,” but over four years, 314 of 350 participating employers switched from guest to domestic workers, with no significant labor shortages or crop losses.
Mr. Wirtz seemed to win, but growers had the last laugh. Abuses continued. Mr. Wirtz had not understood that as long as workers can be threatened with deportation, regulations are unenforceable. No doubt many H-2 employers followed the rules, but others broke them with impunity. H-2 workers were — and still are — threatened with violence, housed in storage sheds, underpaid or not paid, and, most important, deported and blacklisted for doing something about it.
Farmworker advocates were foiled in other ways as well: the more reformers succeeded in extending labor and housing laws to agriculture, the more farm employers resorted to using even more vulnerable undocumented workers. The African-Americans, Mexican-Americans and poor whites who once dominated farm work became rarities. By the 1970s, the big farm-labor housing center in Miami was known as “Mexico City.” Wages and housing conditions remained so depressed that the State Department reportedly sent diplomats bound for developing countries to Belle Glade as part of their training.
Despite these problems, restrictions that kept the H-2 program small were removed in 1986, during the last major immigration overhaul. Abuses multiplied. In 1997, the Government Accountability Office found that the Labor Department had never denied an application to import workers because an employer had violated workers’ legal rights.
Today, growers of any crop in any state can import guest workers from any country. The United States approved about 85,000 agricultural jobs last year, most of which went to Mexicans. But the fortunes of farmworkers have improved little over the decades and now hang in the balance.
The bipartisan Senate compromise is a mixed bag for farmworkers. It would combine increased border security with a path to citizenship — albeit a long path, up to 13 years — for 11 million undocumented immigrants. Unauthorized farmworkers could gain legal status more quickly. But instead of encouraging growers to recruit from among those newly resident farmworkers by improving conditions, the proposal promises growers more guest workers, perhaps over 300,000 by the third year of the program.
New “W” visas would replace the H-2 program and require growers to “attest” to their need for foreign workers, but not prove it. Guest workers would be able to apply for permanent legal status, although it’s unclear if enough green cards would be available. They could also quit an abusive employer for a better one — a big gain — but only if they entered the country with a new W-3 visa that would not provide for free housing and round-trip travel. And workers who felt their rights had been violated could, for the first time, go to federal court.
In contrast, Mr. Goodlatte’s bill would block any path to citizenship, turn unauthorized farmworkers into guest workers and import up to 500,000 more — Bracero redux.
Neither plan does anything to improve wages, require safer housing or protect our mostly immigrant farm labor force from pesticide poisoning. But if an expanded guest-worker program is inevitable, at least the Senate bill, by allowing guest workers some hope of becoming permanent residents, honors the long American tradition of giving the ultimate reward — citizenship — to those who do our dirtiest, most dangerous and essential work.
Posted by Unknown at 7:42 AM