A Role for the Medical Community 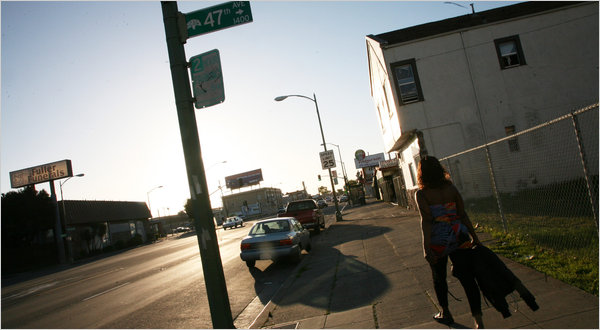 OAKLAND, Calif. — Dr. Kimberly Chang, a physician at a community clinic in Chinatown, will never forget the first young girl she suspected had been sold for sex.

Photographs: Taking Minors Off the Streets

A support group for girls and women vulnerable to the sex trade. More Photos »

Kalea, a 15-year-old Cambodian-American girl who grew up in Oakland, kept coming in to be examined for sexually transmitted diseases, the beginning of a grim cycle of diagnosis and treatment. “I started asking, ‘Are you having sex with new people?’ ” Dr. Chang, 37, recalled. “It was always, ‘No, no, no, no, no.’ Eventually she confided that she was worried about ‘a friend.’ That’s when I asked, ‘Are you trading sex for money?’ ”

Emerging from a long, dark tunnel, Kalea slowly began to spill her stories. How her father beat her. The childhood rape. The out-of-control john who tied her up in a motel bathtub and filled it with scalding water.

Seven years and hundreds of patients later, Dr. Chang’s clinic, Asian Health Services, is in the vanguard of a new public health approach to treating American-born minors lured into the sex trade, a problem enforcement officials and child advocates say has exploded with the Internet.

Once viewed as criminals and dispatched to juvenile centers, where treatment was rare, sexually exploited youths are increasingly seen as victims of child abuse, with a new focus on early intervention and counseling. There is growing recognition that doctors can be first responders, intervening before long years of exploitation and abuse can take an even greater toll.

In Oakland, a handful of organizations that grew out of Asian Health Services have developed new programs for Southeast Asian minors that “take into account the complex culture of foreign-born parents and their American-born children,” said Dr. Sharon Cooper, a forensic pediatrician and child abuse expert at the University of North Carolina School of Medicine.

An estimated 100,000 to 300,000 American-born children are sold for sex each year. The escalating numbers have prompted national initiatives by the F.B.I. and other law enforcement agencies, and new or pending legislation in more than a dozen states, most recently Georgia, which enacted a toughened human trafficking law this month.

The Oakland health clinic is confronting an underground within an underground — the demand for Asian-American girls, with Cambodian-Americans among the most vulnerable. Many immigrant Cambodian parents struggle with poverty compounded by the experience of genocide and its traumatic aftermath, depression. The emotional fallout is ricocheting through generations.

“Oakland is an open-air sex market for young children,” said Sharmin Bock, assistant in charge of special operations for the district attorney’s office in Alameda County, where Oakland is.

The abusers may be pimps, even brothers, who recruit or kidnap girls from the streets and market them online through sites, where they are featured in pulsating ads for massage parlors, escort services, strip clubs, even acupuncturists.

“Asian women are exoticized in our culture,” said Elizabeth Sy, the co-founder of a program for at-risk girls called Banteay Srei that grew out of Dr. Chang’s clinic. “Many Southeast Asian girls come from new refugee populations. Recruiters target these girls because they know they are struggling with issues of cultural identity.”

Girls from many Southeast Asian families chase “an Americanized idea of love,” Ms. Sy said, growing up in emotionally distant households in which, she said, “parents never ask ‘How was school today?’ or say ‘I love you.’ ”

They fall prey to abusers who are highly motivated: the Polaris Project, a national advocacy organization, estimates that a stable of four girls earns over $600,000 a year in tax-free income for the pimp. Drug dealers here are increasingly switching to prostitution, inspired by the bottom line and fewer risks.

“The person dealing drugs has a finite amount of product to sell,” said Jason Skrdlant, an officer with the Oakland Police Department’s vice and child exploitation unit. “But a girl is reusable.”

Over time, Dr. Chang and her colleagues became aware of a disturbing pattern: young patients coming in regularly would bring their friends to be checked for sexually transmitted diseases. To provide social support, Banteay Srei was started to provide peer counseling, classes in women’s health and exchanges with elders to strengthen cultural bonds, including cooking classes.