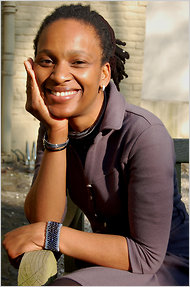 Unigwe, who was born in Nigeria, now lives in Belgium. In a rich mix of schoolmarm British and pidgin English, spiked with smatterings of Igbo and Yoruba, she tells the stories of four African sex workers sharing an apartment in Antwerp’s red-light district. But it is only when Sisi, the rebel among them, is murdered, that her three housemates emerge from their self-protective anonymity to share their family histories.

The person who has brought these women together, it turns out, is Dele, a “big man” back in Lagos whose wealth comes from selling African women to Western European brothels. “Every month I send gals to Europe. Antwerp. Milan. Madrid. My gals dey there. Every month, four gals. Sometimes five or more,” he boasts to Sisi when she first visits his office. “You be fine gal now. Abi, see your backside, kai! Who talk say na dat Jennifer Lopez get the finest nyansh? . . . As for those melons wey you carry for chest, omo, how you no go fin’ work?”

Dele’s offer is brutally upfront: the fee he charges his “gals” for spiriting them into the longed-for West is 30,000 euros, a debt that, combined with the rent they will owe “Madam,” will take many years to repay. Yet each of these four women accepts Dele’s hard bargain, simply because their alternatives are worse.

Ama, raised in a middle-class milieu in which ladies debate the respective merits of houseboys versus serving maids, has been kicked out of her home for revealing that her saintly seeming stepfather, assistant pastor at the Church of the Twelve Apostles of the Almighty Yahweh, had been raping her since she was 8 years old. It is as much a revolt against human hypocrisy as material need that drives Ama to become one of those lewd women the pastor likes to curse from the pulpit.

Efe, who at 16 was knocked up by the local hair-weave merchant, goes abroad so she can support not only her baby but the three siblings who depend on her. Determined to give her beloved son a better life, Efe aims to amass enough money to open a whorehouse of her own one day.

The woman who calls herself Joyce, in fact born Alek, is a Sudanese refugee who was gang-raped as a child by the janjaweed militia and witnessed the massacre of her family. Alek has been coaxed into prostitution by Polycarp, the Nigerian peacekeeper she had hoped to marry. It’s a testament to Unigwe’s ability to convey human complexity that Polycarp, to ease his conscience at having jilted her, is paying off her debt to Dele, an anomaly that gives her unique privileges in the brothel hierarchy.

The dead Sisi, however, is the woman whose story is in some ways the most wrenching. Hers is a tale not of incest, rape or genocide but of the accumulated disappointments that can grind even the most determined soul into defeat. In the scattered chapters revealing the events that lead to Sisi’s murder, we learn how her father, a bright and ambitious village boy, was obliged by his parents to give up his studies and become a lowly clerk in order to help his nine younger siblings through school. “I had bookhead, isi akwukwo. I could have been a doctor. Or an engineer. I could have been a big man,” Sisi’s father fumes. Education is everything, her parents teach the girl. “Face your books, and the sky will be your limit.” They place all their hopes in their only daughter, whose brilliant academic career will surely win her an important job. Together the family members dream, laugh and squabble about the kind of company car and driver Sisi will have, the sort of big house she will live in, with a high-walled garden.

Once she has graduated, however, Sisi discovers that without the right connections, her business degree won’t get her an interview for even the humblest job. It’s from a kind of defiant determination “to grab life by the ankles and scoff in its face” that she decides to make her fortune as an Antwerp “window girl,” enticing men into her booth for paid sex. It is from defiance, too, that she makes the fatal decision to flee the brothel, stop her monthly payments to Dele and start a new life with her gentle Belgian boyfriend.

Unigwe has a deep understanding of poverty and its hungers. She insists that we regard her four central characters as cool-eyed gamblers, not passive victims, as women willing to play “the trump card that God has wedged in between their legs” in exchange for the material goods they crave, the chance of coming home rich enough to buy their families cars, apartments and businesses. She makes you feel a wrenching sympathy for Efe’s willingness to lose her virginity to a fat, smelly old man because she hopes he will give her mauve lipstick and “good-quality hair extensions.” When Sisi, newly arrived in Belgium, is greeted with a paper-bag lunch of orange juice, bananas, supermarket rolls and jam, Unigwe shows her calculating just how much this feast would cost in Nigeria, “how it was enough to feed her family. . . . The magenta-colored spread delighted her taste buds. She could get used to this, to living like this. The life of the rich and the arrived.”

Unigwe conveys both what is miraculous about the West to foreign eyes and what is awful — how people live and die alone, unmourned, without the sustenance of family and neighbors. And she shows us how the women who survive their pact with Dele choose to deploy their hard-won wealth. While Efe stays put, running her own brothel, Joyce and Ama prefer to build their businesses back home.

Despite the horrors it depicts, “On Black Sisters Street” is also boiling with a sly, generous humor. Unigwe is as adept at conveying the cacophony of a Nigerian bus as she is at suggesting the larger historical events that propel her characters. “On Black Sisters Street” marks the arrival of a latter-day Thackeray, an Afro-Belgian writer who probes with passion, grace and comic verve the underbelly of our globalized new world economy.