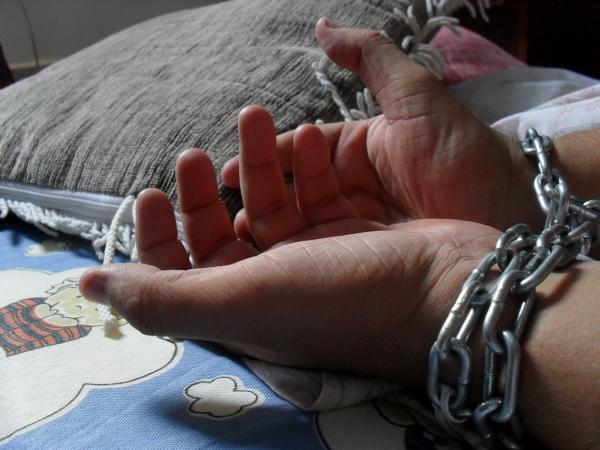 Enlarge image
Credit Imagens Evangélicas
LIVES IN BONDAGE: According to best estimates, 27 million people are held in slavery around the world.
A day-long conference on human trafficking at Broward College on Thursday was an opportunity for experts in the field to shift the emphasis back to the bigger part of the problem. Many of the victims are girls and women who are captured and forced into prostitution but three times as many become slave laborers and many of those wind up in South Florida.
Sponsored by the non-profit Free The Slaves, the conference brought about 300 people to the college's Davie campus to hear panels of prosecutors, investigators and advocates outline the human trafficking problem and discuss solutions.
On the first panel was a frequently heard victim, Katariina Rosenblatt from Miami Beach. She was 13 years old when she was recruited into the sex trade. She told the audience she thought she was among friends, until the day her recruiter brought her to a hotel room wearing a special dress.
"And there was this man, 65 years old, half-dressed, with a beer belly hanging out," Rosenblatt told the audience. "And he was ready to partake in his transaction. I was dressed in my little bride's outfit thinking we were going to play a game. And she said, here's your girl, ready for you. Like he had ordered up a pizza."
Rosenblatt spent four years as a sex slave, suffering abuse, beatings and being forced to take drugs. That was 25 years ago. Since then, things have gotten worse. Florida leads the nation in sex trafficking, say the Broward Sheriff's Office and State Attorney General, and Broward County leads the state.
Sex trafficking is BSO detective Nicholas Masters' daily assignment. He said his county is on the crossroads of slavery.
"The tracks goes up the east coast up to New York down to Florida and then there's one that goes across from Texas to Las Vegas into California and we're kind of the tip of both tracks. They all come down into south Florida," Masters said.
He thinks Broward's unusual number of low-rent extended stay hotels where people can stay unobserved for months may be part of the county's appeal. But it's also on the periphery of a great sports town, Miami, where frequent Super Bowls and the Miami Heat draw throngs of potential sex trade customers.
"Whenever these events happen, there's a huge media blitz and we conduct large scale usually month long operations targeting, trying to curb it and trying to control it as much as possible," he said.
'Sexual trafficking is horrendous but don't forget that there so many other forms of trafficking that are happening right here.'
Sex trafficking is a big and extremely depraved part of human trafficking. But it's not the bigger part.
"Sexual trafficking is horrendous but don’t forget that there so many other forms of trafficking that are happening right here," said Homeland Security Investigations assistant special agent in charge Carmen Pino. He told the conference 27 million are held as slaves around the world, and three quarters of those are forced laborers. They work in factories, farm fields, as residential domestic servants -- and sometimes in South Florida's best resorts.
One of his cases involved dozens of Filipinos who spent years in slavery in Boca Raton.
"They would be cutting the grass and getting the greens ready in the golf course. Then, they would quickly shower, change into the waiter outfit and they would be working in the banquet hall till late at night. Cycle that seven days a week for a number of years," Pino said.
Like many, the laborers had promised to pay stiff fees to contractors in their home countries for a chance at new lives in the U.S. But Pino says the fees were just the first link in a chain of debt that would keep them in bondage.
"For example, if they're being taken from their apartment to work, well that's going to cost you five dollars," Pino explained, as if to a Filipino debt slave. "Oh, the apartment itself? You're going to rent that from us and that's 600 dollars a month, so they're in this perpetual downward spiral of never getting out of the debt."
The husband-and-wife labor contractors in that case, Sophia Manuel and Alfonso Baldonado, Jr., were subsequently indicted, convicted and sentenced to prison terms of 51 and 78 months respectively.
Getting on top of the trafficking human beings, for sex or labor, will be complicated and difficult, experts said. But, as Palm Beach/Broward state senator Maria Sachs said in her opening remarks to the conference, politics should not be a problem.
She said there's no partisan divide over putting an end to human slavery.
Listen
3:35
Click to hear the radio version of this story.
Posted by Unknown at 6:20 AM