By DAVID MCSWANE OF THE SARASOTA HERALD-TRIBUNE
Listen
4:16
When Moe Crowle walks along Dr. Martin Luther King Jr. Way, a blighted drag in Sarasota’s historically black neighborhood, men on bikes shout from across the street and a mother wearing cheetah-print pants walks away from her baby stroller to chat. An old Cadillac with dark tinted windows stops and then crawls along the sidewalk next to her. A man opens the door and stares. 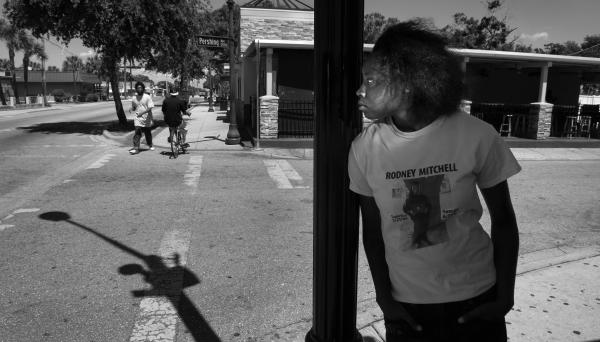 
For better and worse, Moe is well-known in this north Sarasota neighborhood. The glares have been a constant since she was 17, when she was first prostituted in this affluent beach town.
“When I keep thinking about it, and dwelling on it, you know, it gets aggravating,” Moe says as she walks toward the cluster of townhomes where she trafficked. “It just brings me back to a place where I don’t want to be, and that place is on this side of town, remembering what happened, so it’s like I’m re-living it.”
Like many prostituted children, Moe was sexually abused at an early age. By the time she was 15, Moe dropped out of High school. And in April 2011 she ran away from her mother’s home. She was quickly taken in by two women.
“My first -- what -- two weeks were heaven. I was smoking all that I want to, drinking what I want to, having anybody over to the house that I want to, doing my own thing, what a 17 year old could never possibly imagine,” Crowle says.
But soon Moe’s new friends were asking Moe to pay her way -- or the fun would stop and she would be homeless. The two women told her she could make money in exchange for sex. They dressed her up in high heels and suggestive clothing, coached her and sent her to this hostile street.
Moe’s story is just a single case study in a harrowing national problem. Child advocacy groups estimate that at least 100 thousand U.S. children are trafficked each year in the U.S. These are American children coerced or abducted by traffickers or pimps throughout the country, including here in Florida.
Sarasota Herald-Tribune reporter David McSwane spent the last year with survivors of sex trafficking and told their stories as part of a multimedia presentation called “The Stolen Ones.” What the newspaper found was a justice system that is ill-equipped to help victims of this underground economy.
To read the full story, go to heraldtribune.com/thestolenones.
Posted by Unknown at 5:31 PM