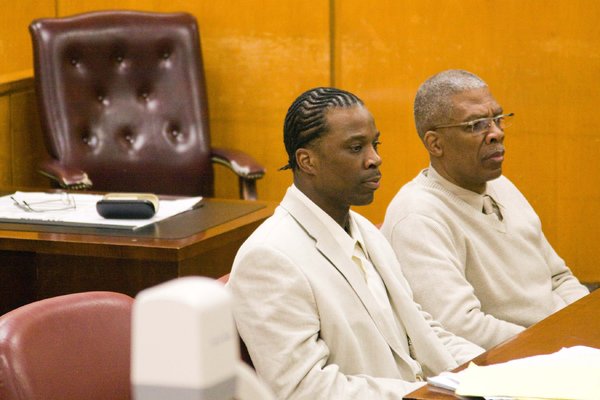 John Marshall Mantel for The New York Times
Vincent George Sr. and his son are on trial for sex trafficking, which carries a possible prison sentence of up to 25 years.

To hear the testimony of the women who worked for them, Vincent George Sr. and his son were not the violent and manipulative sex traffickers that prosecutors described, but, rather, the heads of a happy extended family working together for a brighter collective future. 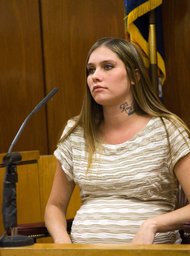 Two women who worked as prostitutes for Vincent George Sr. and his son testified on their behalf on Tuesday. One of the women, Heather Keith, has Vincent George Jr.’s nickname, King Koby, tattooed on her neck.

“The whole point to our family was just to become better,” said Danielle Geissler, one of the two women who testified on Tuesday. “This wasn’t our lifestyle. This wasn’t something where we said, ‘Hey, I’m going to do this until I’m gray.’ “
Ms. Geissler testified for the defense on Tuesday at the Georges’ trial in State Supreme Court in Manhattan. The Georges’ lawyers have conceded that the father and son were promoting prostitution, but they are fighting the sex trafficking charges, which carry a possible prison sentence of up to 25 years.
The Manhattan district attorney’s office has described Ms. Geissler and her colleagues as victims — women who were coerced and intimidated by the Georges and kept in prostitution under the threat of beatings and withheld money.
“While these women were not chained up, they did not have real options,” Kim Han, an assistant district attorney, said during opening arguments two weeks ago.
The case is part of a shift in law enforcement that seeks to treat prostitutes like victims instead of criminals. A state law that passed in 2007 broadly defines sex trafficking by the methods a pimp uses to control a prostitute. The threshold can be met if the pimp instills fear of a beating, but also by more subtle intimidation, like spreading a secret that might subject a prostitute to ridicule, or doing anything “calculated to harm” the person’s health, safety or immigration status.
The prosecution has built its case on hundreds of hours of profanity-laced recorded phone calls between the Georges and the women who worked for them. On one call, Vincent George Jr. is heard threatening to beat one of the women if she fails to “get me my money” or to check in every two hours.
Bridgette Carr, director of the Human Trafficking Clinic at the University of Michigan Law School, said it was not common for prostituted women to testify for their pimps in sex trafficking cases, in part because many prosecutors declined to bring charges if the women would not testify for the prosecution. But Ms. Carr said it was “not shocking” that women would assist the defense, and may actually be evidence of how effective the pimps were in manipulating the women. Ms. Geissler, 31, testified that she was born and raised in Quakertown, Pa., and met Vincent George Jr. 14 years ago, when she was 17. They began a sexual relationship and she began working in prostitution for him around her 18th birthday, she said. They have an 8-year-old daughter together. She said Mr. George took care of her financial needs while she took several years off from prostitution following their daughter’s birth.
She lived in a house in Allentown, Pa. Ms. Geissler referred to other prostitutes that worked for the Georges as her “wife in-laws.” She said they would drive into Manhattan together and pass out cards offering massages, a cover for prostitution. But they also went skiing in Vermont and took vacations together to Florida.
She testified that she was in love with Vincent George Jr., 35. She also said that Mr. George, after his arrest, proposed marriage to her, another woman who testified, Heather Keith, and two other women. Ms. Geissler said that she and the other women all accepted, and that Mr. George suggested they move to Africa so they could legally marry.
She said she was not a victim, kept the money she made, and never took his threats seriously.
“I let it go in one ear and out the other,” Ms. Geissler said.
Ms. Keith, 26, said she met Vincent George Jr. when she was 19 and working as a stripper and prostitute in the Buffalo area. He moved her to Allentown, helped her kick a cocaine addiction and set her up in a house, she testified.
Ms. Keith appeared in court wearing a tan-and-white striped dress, which accentuated her pregnant belly; Mr. George’s nickname, King Koby, was tattooed on her neck. To show she was not trapped “in the life” by the Georges, she said that she continued working as a prostitute after the Georges were arrested, until she became pregnant.
“I would say that I make my own choices,” she said. “I am not a dumb person. I know what I’m doing.”
Posted by Unknown at 4:16 AM