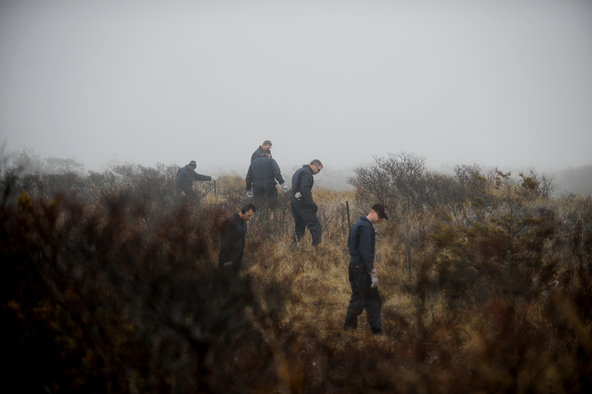 Robert Stolarik for The New York TimesThe police searched for human remains on Long Island in 2011.

The Great Divideis a series about inequality.

BACKPAGE.COM,BARTHELEMY, MELISSA,BRAINARD-BARNES, MAUREEN, COMPUTERS AND THE INTERNET, COSTELLO, AMBER LYNN, CRAIGSLIST,GILBERT, SHANNAN, LONG ISLAND (NY), MURDERS AND ATTEMPTED MURDERS,PROSTITUTION, WATERMAN, MEGAN
Take the Long Hill Road exit off I-95 in eastern Connecticut and curl south toward the waterfront city of Groton and you’ll find each of the places that briefly employed Maureen Brainard-Barnes. There is the TJ Maxx and the AutoZone and the Stop and Shop. And the Chester’s chicken counter, where she made the potato wedges. And the shopping center with the Groton Cinema 6, where she picked up discarded snacks from the carpet in exchange for free admission and a bag of popcorn.
In 2005, Ms. Brainard-Barnes was a 22-year-old single mother who had difficulty holding down a steady job. She never could afford her own place, staying with her sister for long stretches and occasionally with a boyfriend. Modeling, she thought, could lead to a music career. As soon as she enrolled on a site called ModelMayhem.com, she received dozens of e-mails from places that purported to be modeling agencies but that, after a few clicks, turned out to mean nude modeling and sometimes working as an escort. She wasn’t thrown by seeing this. What did surprise her was the money.
Within a few months, Ms. Brainard-Barnes was making up to $2,000 a day on trips to New York City. She posted ads on Craigslist and worked out of a hotel room in Midtown for short stretches and then returned home to care for her daughter. After so many years of depending on others, she could leave her responsibilities behind and become another person for a while — and she could earn enough money to fulfill those same responsibilities. Online, she could be her own boss and not share what she made with anyone — not a pimp, not an escort service, not a boyfriend.
In 2010, Maureen Brainard-Barnes’s body was one of four uncovered close by one another in the sand dunes of Gilgo Beach, Long Island, wrapped in burlap. Three years later, the Long Island serial killer case remains unsolved, even as six more sets of remains have been discovered nearby along Ocean Parkway and farther east. The first four bodies were identified as women in their 20s — just like another woman, Shannan Gilbert, who had disappeared three miles from where the four bodies in burlap were found. These five women clearly had much in common. Maureen Brainard-Barnes, Melissa Barthelemy, Shannan Gilbert, Megan Waterman and Amber Lynn Costello all grew up in struggling towns a long distance from Long Island. And they all were escorts who discovered an easy entree into prostitution online.

ReutersFrom left: Maureen Brainard-Barnes, Melissa Barthelemy, Amber Lynn Costello, Megan Waterman, Shannan Gilbert.
It had seemed enough, at first, for some to say that the victims were all prostitutes, practically interchangeable — lost souls who were gone, in a sense, long before they actually disappeared. That is a story our culture tells about people like them, a conventional way of thinking about how young girls fall into a life of prostitution: unstable family lives, addiction, neglect.
But in the two years I’ve spent learning about the lives of all five women, I have found that they all defied expectations. They were not human-trafficking victims in the classic sense. They stayed close to their families. They all came to New York to take advantage of a growing black market — an underground economy that offered them life-changing money, and with a remarkably low barrier to entry. The real temptation wasn’t drugs or alcohol, but the promise of social mobility.
The Web has been the great disrupter of any number of industries, transforming the way people shop for everything, and commercial sex has been no exception. Posting ads online, escorts find clients without ever having to leave home or walk the streets. The method is easier, seductively so, almost like an A.T.M. — post an ad, and your phone rings seconds later. That ease clearly doesn’t mitigate the risk of meeting strangers, though it might seem like it to some escorts.
The great transforming feature of the Internet is its anonymity. We all have learned that a person can do practically anything online without even their closest loved ones knowing, from commenting on Yelp or Gawker to selling stolen goods or viewing porn videos. This is as true for the escorts as it was for the clients, who have turned sites like TheEroticReview.com into a sort of Yelp for steady customers of commercial sex. No one has to go to a bad part of town to look for what he wants.
While no one has yet measured exactly how significantly the Internet has increased the number of working escorts, it’s already clear that many Internet sex workers would never seriously consider working on the street. Scott Cunningham, an economist at Baylor University, conducted a survey of 700 sex workers in the United States and Canada. “The Internet is augmenting the sex market by bringing in women who would not have entered the sex market without the Internet,” he says. In one month chosen at random by Mr. Cunningham — May 2009 — an average of 1,690 sex-worker ads were posted online every day in the New York City area alone.
All it took to persuade many of these women to enter the field, Mr. Cunningham theorizes, was a little financial pressure, or “economic shocks.” The explanations for entering escort work, he says, “are often surrounding loss of income or increase of expenses they need to cover. A woman told me she was getting a divorce, she had a child, her husband was not going to provide child support. She already had a 40-hour-a-week job. And so her options were, she could get another job and work about 60 hours a week. Or she could do this and see her child more and have more money.”

Internet escorts are better educated but they are still vulnerable to attack.